Google kicked off the New Year with a big shakeup in the website ranking world. Around January 9th 2016 Google changed its core algorithm (how Google ranks sites), our internal tracking tools detected historically-large rankings movement to this algorithm. Google rarely confirms or denies changes to rankings but John Mueller who is a Webmaster Trends Analyst at Google. Tweeted: “It’s not penguin; not ‘confirmed-ish’ just ‘confirmed’.” 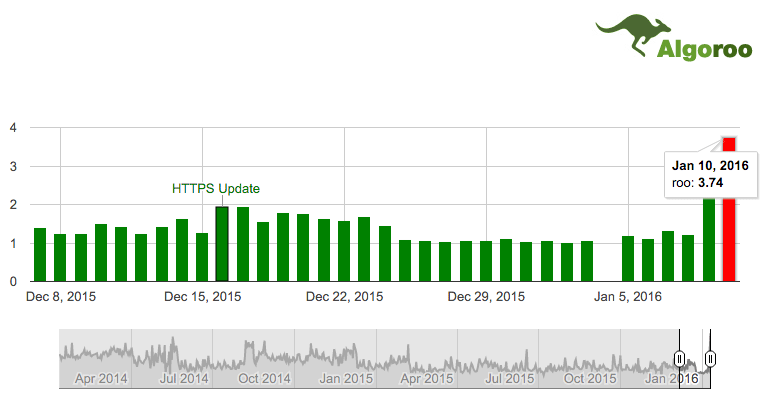 Penguin refers to the Google Penguin Update in April 2012 (but continues to make small changes) to better catch sites deemed to be spamming its search results, in particular those doing so by buying links or obtaining them through link networks designed primarily to boost Google rankings.

What we know about this update.

Show Up Web Design was very positively impacted by this update for example: For the search term”web design” we went from a 30 day rolling average ranking of 5.3 to a flat number #1 ranking (1/9/2016 theses ranking change all the time). Also many of our very happy clients have reported high rankings. So, without reveling to much of our secret sauce, here is what we know.

This update looks like Penguin, but it is impacting websites worldwide and very large – Google has 200+ ranking factors, some say its thousands but this multi-purpose update is changing a wide range of search quality parameters. We know this from googles own webmaster reports and we know this update carries global impact.

Local, Local Local! Over the last few years Google has been improving local search results so, for example in you live in Santa Barbara and you type in “web design” you would get the best web design firm in Santa Barbara. This is a positive user experience for the web design company and for the customer, Google would not be #1 if the results they returned did not provide a positive user experience. Some websites like (Show Up Web Design) are now showing double listings in both classic organic and local organic search results.

Certain results now show long and very detailed snippets in the search results. Google has historically disregarded meta description. I also noticed we have 6 site links which are more relevant.